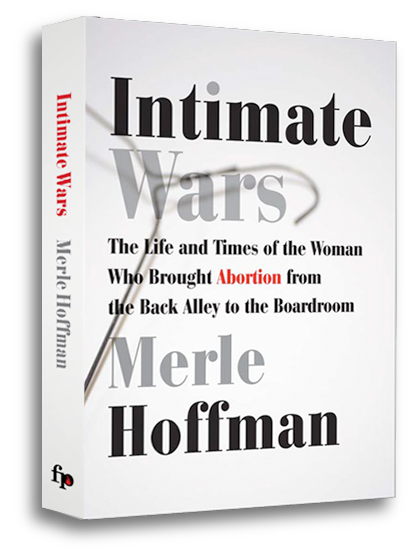 BUY IT NOW from Amazon.com


This week from Merle...
"Intimate Wars by Merle Hoffman"

Advance Praise and Reviews for "Intimate Wars: The Life and Times of the Woman Who Brought Abortion fom the Back Alley to the Boardroom" by Merle Hoffman

FabOverFifty.com: The Best Memoirs of the Year (so far!)

What makes a woman so brave? Gaining insight into this question was one of the chief pleasures of this frank book. From the time she was a child, Hoffman always identified with the heroes and heroines of myth and history. Read entire review at FabOverFifty.com

Merle Hoffman tells Salon that pro-choicers have their own inaction to blame if reproductive rights are curtailed. Read entire review at Salon.com

Excerpt from Intimate Wars:
Twenty years ago I attended a party at which a numerolo­gist offered to analyze my name. After performing what appeared to be complicated mathematical computations she told me my number was eleven—a “power number”—then looked at me quizzically. Read entire excerpt at The Nervous Breakdown

"The act of choosing whether of not to have a child is often an act of love, and always an act of survival," she writes. Ultimately, Intimate Wars is as much about her personal journey as it is a snapshot of how the 39 years since Roe have affected one clinic. Read entire Review at Mother Jones

it's impossible to read "Intimate Wars" and not be moved by her determination and passion. Hoffman's commitment to women's health, and her reflections on her own missteps and the missteps of the pro-choice movement, are honest and heartfelt. From her decision to adopt a child to her love affairs, this is the story of one woman's quest to live fully. Opinionated, fierce, bold and brash, "Intimate Wars" chronicles Hoffman's efforts to improve women's lives and influence history. She deserves our gratitude. —Eleanor J. Bader
Read entire Review at Truthout | Book Review

Merle Hoffman was one of the trailblazers of the pro-choice movement in the USA, a controversial feminist who opened one of the first ambulatory abortion centres in America, and who has lived a life of boldness, ambition and, dare I say it, ego. Many times throughout the book I wrinkled my nose in distaste at her decisions, and her attitudes, and then had to ask myself how much more "natural" I would have found them if she were a man. In that respect the book was very challenging for me, in a good way. Read entire Review at antichoiceantiawesome

As director of one of the nation’s first ambulatory abortion clinics, activist and journalist Hoffman implemented "Patient Power" to ensure that the staff did not demean women seeking abortions. Characterizing abortion as "often an act of love, and always an act of survival," she eloquently chronicles more than three decades of struggles to keep abortion legal. Readers will learn much about her drive to recast “reproductive freedom as a positive moral value. —Publishers Weekly

A searingly honest debut memoir by a leader in the fight for a woman's right to "legally gain and exercise reproductive choice—the power of life and death." —Kirkus Book Reviews
Read entire review on Kirkus Reviews

The "Intimate Wars" of the Indomitable Merle Hoffman: There are many incredible stories of about leaders in the women’s rights movement. This is one of them.

"Intimate Wars: The Life and Times of the Woman Who Brought Abortion from the Back Alley to the Boardroom" is a complex story that is moving, sobering, and should not be missed. —Marcy Bloom
Read entire review on RH Reality Check

"'Intimate Wars' is a fascinating personal narrative told from the epicenter of abortion politics and service delivery. Hoffman illustrates her unwavering commitment to the heart of the issue: the power of every woman to make her own childbearing decisions." —Gloria Feldt
Author of No Excuses and former president of Planned Parenthood

"A modern-day Amazon warrior, Merle Hoffman has blazed a freedom trail while saving countless women’s lives along the way. She recognized early on that without the right to reproductive healthcare, women can not share equal power in society." —Bill Baird
Father of the Abortion Movement

"Merle Hoffman's gorgeous memoir vibrates with raw power and nerve. Her tremendous empathy for the women whose lives she has touched, and her unfailing courage in defending our right to abortion, are both inspiring and humbling."
—Jennifer Baumgardner
activist & author of Manifesta, F' Em, and Look Both Ways

"Merle Hoffman is the bravest woman in America that I know."
—Kate Millett
author Sexual Politics

"At last! Merle Hoffman's bold and courageous memoir of vision and heart! Too often we have lost the stories of our rebel feminist heroes, so urgently needed during this moment of fundamentalisms and backlash. Hope and the future of women's history will be greatly enhanced by this book. On the front lines of the abortion wars, Merle Hoffman found her calling— and never turned away from the harshest battles or denied the most painful truths. This gift is one we all need now as we regroup for justice, understanding and woman power around the globe."
—Blanche Wiesen Cook
author of Eleanor Roosevelt, vols. I and II